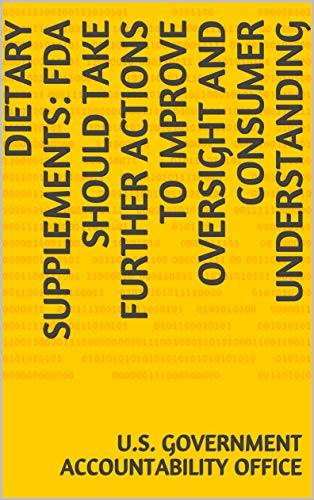 Dietary supplements and foods with added dietary ingredients, such as vitamins and herbs, constitute multibillion dollar industries. Past reports on the Food and Drug Administration’s (FDA) regulation of these products raised concerns about product safety and the availability of reliable information. Since then, FDA published draft guidance on requirements for reporting adverse events–which are harmful effects or illnesses–and Current Good Manufacturing Practice regulations for dietary supplements. GAO was asked to examine FDA’s (1) actions to respond to the new serious adverse event reporting requirements, (2) ability to identify and act on concerns about the safety of dietary supplements, (3) ability to identify and act on concerns about the safety of foods with added dietary ingredients, and (4) actions to ensure that consumers have useful information about the safety and efficacy of supplements.
FDA has made several changes in response to the new serious adverse event reporting requirements and has subsequently received an increased number of reports. For example, FDA has modified its data system, issued draft guidance, and conducted outreach to industry. Since mandatory reporting went into effect on December 22, 2007, FDA has seen a threefold increase in the number of all adverse event reports received by the agency compared with the previous year. For example, from January through October 2008, FDA received 948 adverse event reports–596 of which were mandatory reports submitted by industry–compared with 298 received over the same time period in 2007. Although FDA has received a greater number of reports since the requirements went into effect, underreporting remains a concern, and the agency has further actions planned to facilitate adverse event reporting. FDA has taken some steps to identify and act upon safety concerns related to dietary supplements; however, several factors limit the agency’s ability to detect concerns and remove products from the market. For example, FDA has limited information on the number and location of dietary supplement firms, the types of products currently available in the marketplace, and information about moderate and mild adverse events reported to industry. Additionally, FDA dedicates relatively few resources to oversight activities, such as providing guidance to industry regarding notification requirements for products containing new dietary ingredients. Also, once FDA has identified a safety concern, the agency’s ability to remove a product from the market is hindered by a lack of mandatory recall authority and the difficult process of demonstrating significant or unreasonable risk for specific ingredients. Although FDA has taken some actions when foods contain unsafe dietary ingredients, certain factors may allow potentially unsafe products to reach consumers. FDA may not know when a company has made an unsupported or incorrect determination about whether an added dietary ingredient in a product is generally recognized as safe until after the product becomes available to consumers because companies are not required to notify FDA of their self-determinations. In addition, the boundary between dietary supplements and conventional foods containing dietary ingredients is not always clear, and some food products could be marketed as dietary supplements to circumvent the safety standard required for food additives. FDA has taken limited steps to educate consumers about dietary supplements, and studies and experts indicate that consumer understanding is lacking. While FDA has conducted some outreach, these initiatives have reached a relatively small proportion of dietary supplement consumers. Additionally, surveys and experts indicate that consumers are not well-informed about the safety and efficacy of dietary supplements and have difficulty interpreting labels on these products.

There are no reviews yet.

Be the first to review “Dietary Supplements: FDA Should Take Further Actions to Improve Oversight and Consumer Understanding” Cancel reply

$39.95
Add to compare
Added to wishlistRemoved from wishlist 0
Dietary Supplements

$17.95
22%
Add to compare
Added to wishlistRemoved from wishlist 0
Dietary Supplements

$19.99
Add to compare
Added to wishlistRemoved from wishlist 0
Dietary Supplements

$18.66
Add to compare
Added to wishlistRemoved from wishlist 0
Dietary Supplements

$16.89
Add to compare
Added to wishlistRemoved from wishlist 0
Dietary Supplements

$14.97
Add to compare
Added to wishlistRemoved from wishlist 0

At melttodrip.com we participate in the Amazon Services LLC Associates Program, which is an affiliate advertising program designed to provide a means for websites to earn advertising fees by advertising and linking to amazon.com