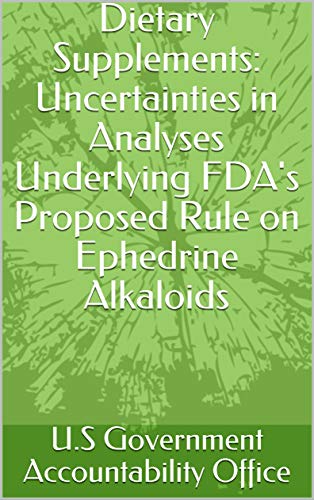 Pursuant to a congressional request, GAO reviewed the analyses underlying the Food and Drug Administration’s (FDA) proposed rule on the food supplements, ephedrine alkaloids, focusing on: (1) the scientific basis for FDA’s proposed rule; and (2) FDA’s adherence to the regulatory analysis requirements for federal rulemaking.
GAO noted that: (1) FDA based its proposed rule on numerous reports of adverse events associated with products thought to contain ephedrine alkaloids; it also used evidence from scientific literature indicating that ingestion of ephedrine alkaloids adversely affects some individuals; (2) the number and type of adverse event reports (AER) warranted FDA’s consideration of steps to address safety issues; (3) however, GAO has concerns about the strength of some of the information FDA used to support two aspects of the proposed rule: the dosing level and duration of use limits; (4) while there was scientific evidence showing adverse events at levels above 20 milligrams (mg) per serving, FDA’s dosing level proposal of 8 mg per serving was based on information associated with only 13 AERs–the quality of which is questionable; (5) for the duration of use limits, FDA relied on scientific studies that showed problems associated with extended use, well beyond the 7-day limit proposed; (6) moreover, FDA did not establish a causal link between the ingestion of ephedrine alkaloids and the occurrence of adverse events for either its proposed dosing level or duration of use; (7) FDA also based its estimate of the benefits of the proposed rule on the annual number of adverse events reported to FDA; (8) however, because FDA did not document which AERs it identified as containing serious events, GAO could not determine the accuracy of FDA’s estimated benefits; (9) in addition, FDA has no internal guidance on the use of AERs for rulemaking related to foods and dietary supplements, and the AERs were used differently in this proposed rule than in prior rulemaking; (10) the agency generally complied with the statutory and executive order requirements for rulemaking, but the cost-benefit analysis that accompanied the rule does not reflect the full range of uncertainty associated with the proposed rule; (11) FDA’s cost-benefit analysis and other analyses included the primary elements required under Executive Order 12866 and related best practices guidance and the Regulatory Flexibility Act; (12) the Unfunded Mandates Reform Act’s requirements did not appear to apply to the rule; (13) although FDA disclosed the basic methodology, data, and assumptions used in its cost-benefit analysis, the agency did not always disclose why certain key assumptions were made or the degree of uncertainty involved in those assumptions; and (14) it also did not disclose that alternative assumptions would have had a dramatic effect on the agency’s estimate of the benefits of the proposed actions.

There are no reviews yet.

$10.70
33%
Add to compare
Added to wishlistRemoved from wishlist 0
Dietary Supplements

$19.99
Add to compare
Added to wishlistRemoved from wishlist 0
Dietary Supplements

$14.97
Add to compare
Added to wishlistRemoved from wishlist 0
Dietary Supplements

$29.99
Add to compare
Added to wishlistRemoved from wishlist 0
Dietary Supplements

$23.52
16%
Add to compare
Added to wishlistRemoved from wishlist 0
Dietary Supplements

$26.99
Add to compare
Added to wishlistRemoved from wishlist 0

At melttodrip.com we participate in the Amazon Services LLC Associates Program, which is an affiliate advertising program designed to provide a means for websites to earn advertising fees by advertising and linking to amazon.com